on April 23, 2013
So, here's the biggest PS Vita game on the block, the one to save the day. Expect that hasn't really worked out. Still, that's not Persona's fault, that's something for Sony to chew over. Atlus on the other hand, has a bona fide work of genius on their hands, crafted from the PS2 original. 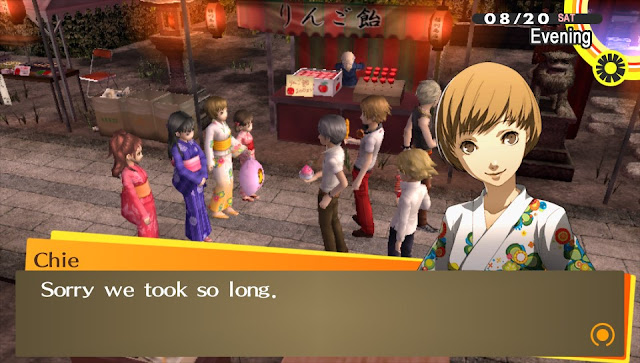 A game finely crafted (which it should be, considering we're on No. 4) to guide the player through some only-just-a-bit annoying grinding, with a sense of humour, a sense of value to the lives and well-being of the characters, and the fantastic concept of the Personas as your big weapon which can be built up to create the perfect superpower of choice.

I'd played the opening hours of Persona 3 Portable and got the general hang of it, before pausing that effort as this update of the PS2 game launch loomed. I didn't want to get too into things to feel jaded by doing it all again. The main difference I can see is you don't have to blow your own brains out to summon a persona, which is nice. 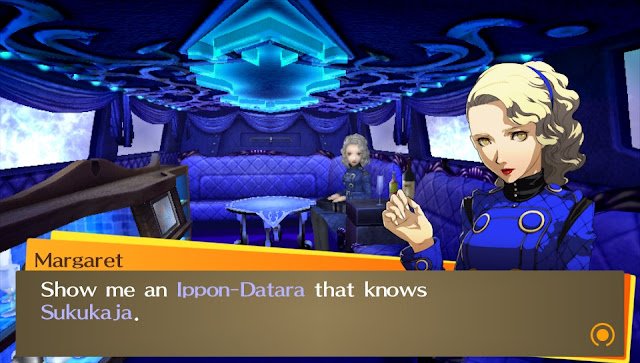 Instead, as a newcomer to a small-town school the hero has to fit in with the school's schedule, make friends and then gets involved in the murder mystery that's sweeping the town. Soon he and his pals are being sucked through TV screens into an alternate dimension where people are meeting their true dark sides, and either accepting them, or being spat out dead into the real world.

To combat the force behind these horrors that come in the rain and fog, your team must power-up by exploring cookie-cutter level after level, fighting off the freakish nasties with basic weapons (you start out with a golf club, can use a fishing rod and even highly efficient corn-on-the-cob). Once the story gets going, your personas come more to the fore as a fighting force. If you've played the previous games, then the action, the Velvet Room and the persona concept are all pretty much the same. 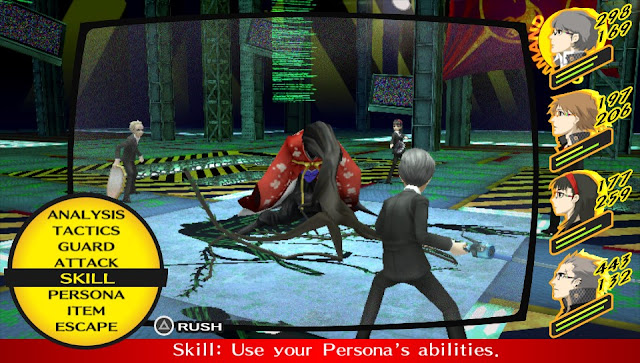 If you haven't, a persona is a construct of your soul, based on your efforts in the real world, and the relationships you build. Some are outright attack machines, others can be used to heal and buff the party with many shades in between. Each has multiple skills and grows in power as you progress.

You pick up more along the way through a series of cards dealt after most battles. But it is rather annoying sacrificing personas and skills constantly to make way for new ones without really getting to know them. 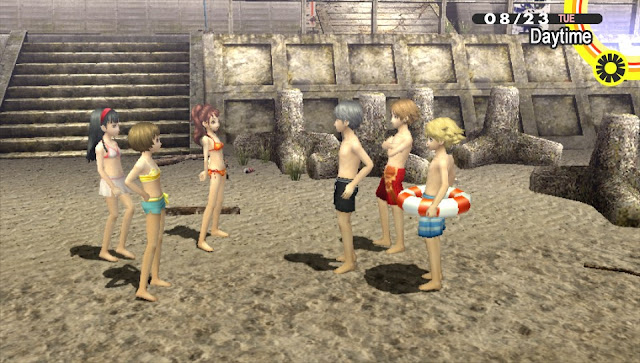 The trick is to blend these personas in the Velvet Room, a lounge-lizard witches' cauldron to build better personas. Armed with the finest of these you can take on the game's boss characters, but first you'll probably find your butts getting whipped repeatedly, which is when you discover the need to rerun the levels a few times, grinding and grinding.

That's a bit of a pain, but with combat, fast, fluid and pretty fun, and each level cunningly designed around the twisted desires of their creator, it is not a major problem. You race up to a beastie on the level, get the first blow in and can then beat it down with repeat attacks, a couple of personas and a bundle attack if they're weak enough. Keep an eye on your health and persona power all the same and use the many healing potions you pick up to keep in top form.

You do have to be pretty self-preservation minded about this as when you die, you get kicked back to the start of the level, so letting your comrades take a beating and focusing on healing yourself is essential. 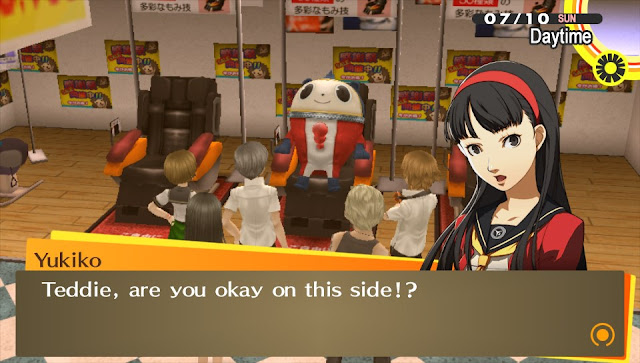 Back in the real world, you can use goodies found in battle, or treasure chests, to craft new items, increasing your defensive and offensive abilities. Going shopping, and meeting the locals is always fun and you have to wonder what fate will befall your niece, Nanako, who's always sat in front of the TV. Then its back to school for the day's lessons, extracurricular activities, and social groups.

With easy jumps between places in both realms, the adventure and action really moves along at a pace and it all looks so much better than playing a PSP or PS2 game on the Vita's screen. The only thing that prevents a perfect score is the grim knowledge that you'll need to grind lots to beat even the optional bosses, surely there's a more elegant solution? 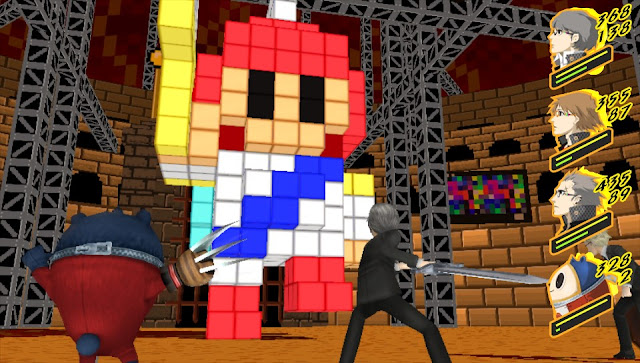 But the personality of the game, the fragility of the characters and the sense of foreboding as the rain comes down and the fog closes in, they all make a little grinding very well worth it. There are grim and happy endings to experience that will pull at the heartstrings, and while the ending phases drag out, there's huge replay value in finding what you missed the first time around, getting closer to the other characters and just enjoying the ride one more time.

Yes, you've seen all the high scores for the game, but you can only realise why it's so special once you spend a little time in the world, where else do you gain courage by eating tongue-melting Tofu?

Update: played Persona 5 recently, a good experience on Remote Play, but you know, it isn't quite as homely or caring as P4G, so I reckon this is still the best in the series