on February 13, 2013
Wired has done a smart job of promoting this game, developed by the fishing masters at SIMS in Japan, all the way up to launch. There's been plenty of teasers and trailers, showing off the characters who should lift it above being just another console fishing game. 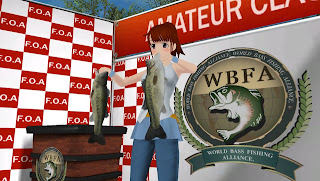 Yet, when you get into Hooked On, you're left wondering if they're there to gloss over the thin veneer of a game. The characters have different skills, but there's little explanation of how they're used and the tutorials don't help, the controls are - initially - deeply annoying. I mean, of the Vita's controls, what's more natural to simulate a fishing reel than the analog stick?

Remember the scene in Jaws where Quint plays out line before catching a Marlin? "Tick, long-pause, tick" goes the reel, there's none of that sense of anticipation here. Instead the game offers a mad on-screen slider or stabbing the circle button, but they offer no real physical approximation. And, why does a 0% strength cast throw the lure 80% of the way to the target? What if I was trying to drop the bait just over the side of the boat? 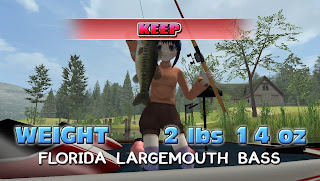 Odd things like that can be overcome with a little patience, and then you're fishing happily, trying to find the right bait to grab the right fish, either against the clock or against "opponents" who you never see. At least in Everybody's Golf, which this game tries to mimic, you can see and be taunted by an opponent, in this game there's no whoop from down the course as they race ahead of you, or an expressive mutter as they lose another fish. 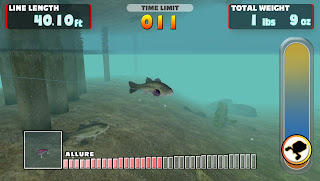 All there is choosing the bait, most of which won't work, and casting the line, for which there is very little skill. Then, waiting to see if anything bites and playing the annoying touchscreen game (or ignore that and use left-stick to avoid losing the fish) when a bass or other nibbler does take the lure. If Hooked On had taken a cue from FuturLab's efforts of expanding the basic genre, it could have had us chasing around the lakes and ponds for all sorts of rare fish and goodies, instead, you're sat there with little reason to move once you've found a few bass, which in itself feels rather depressing - this game has little sense of adventure. 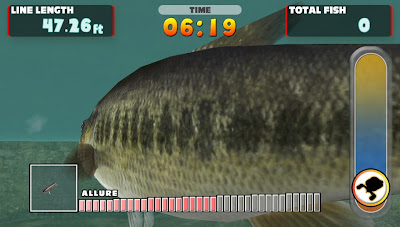 But, beyond the annoying UI and the failure to innovate, there's still something basically entertaining about trying to reel in the bigger fish. With a season or challenge play mode, there's plenty of fishing to be done in varied pretty locations (if only there was more reason to explore them), with lots of events and bait to unlock.

You can upload scores to find your online ranking and try to better your performance in each event or area. But when you know where to fish, it becomes pretty repetitive and misses many opportunities. I keep coming back to it in the hope I'm missing something, but can't seem to find the extra lure that makes this an addictive game. For the modest amount of fun in the game there is always an annoyance, like why does a 1lb fish (not the song) break the line that can happily hold a 6lb fish? It makes little sense, wastes its characters and fails to explore any new opportunities.