on December 07, 2012
I'd never heard of this until it dropped on the PSM store as a freebie from Heavy Spectrum. And I wouldn't rate it as much of a puzzle game apart from two small features that make it rather compelling. First is the music, which sounds rather heisty and Oceans 11, the second is the lack of a time limit which means you can think about your moves.

The game is free, with one mode to play, and you can pay to play a couple of others, but I'll stick with the free game for now. Bullion Blitz is pretty simple, you have three colours, silver worth $10 a square, gold worth $20 and purple world $30. Squares are formed randomly at the start of a level, so you can have lots of individual squares, some lines, columns or larger squares, which multiples the value when you tap to eradicate them. 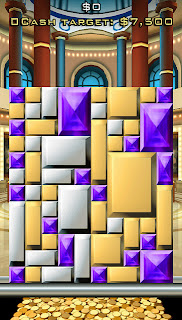 Your job is construct the largest squares of the more valuable colours possible in a kind-of Kerplunk-style manner by tapping the right squares, rows or columns, to create larger volume blocks of colour. This is aided by some bonus drops that can move things left or right, change colours or break the blocks into their individual component squares, allowing you to reform the board.

Each round, the target score moves higher, so you need to think ahead, which is where the lack of a time limit comes in handy. Luck plays a small part, but if you think hard enough, you can usually plot your way to success. The other game modes add new elements and dynamics, but the free game is just a great little diversion as it is.