on November 16, 2012
I don't know if past experience will help or hinder my review, but I've played a few hours of the first Assassin's Creed on Xbox, enjoying the huge steepling vistas and the rather novel approach to the story. I stopped playing that when I knew I'd be buying this, as I didn't want to be all AC-ed out. On the plus side, I can review this with a relatively open mind, without constant references to the main games and carping about feature X or Y missing or borked that lots of other reviews seems obsessed with.

The Liberation story follows a new assassin in the series, Aveline, a mixed-race well-to-do lady who can disguise herself as a slave or go full-bore in her assassin's outfit. Each has strengths and weaknesses, which adds a little strategy and variety to the game.

Using money raised from completing missions and looted from victims, you can buy clothes shops, tailors and other businesses around town, as well as doing some trading around the Caribbean, to boost revenue for your family business empire. A lot of the early game is set around tasks to do with the biz as you get up to speed, but the overall focus is on strange cults, vanishing slaves, peculiar artefacts and the battle between Assassins and their enemies in time.

So, Aveline starts out with a few tentative leaps and bounds as a child, setting the back story, grows up quickly to become a fine young woman who can charm the pants of some men to help her out and slit the throats of others who get in her way. 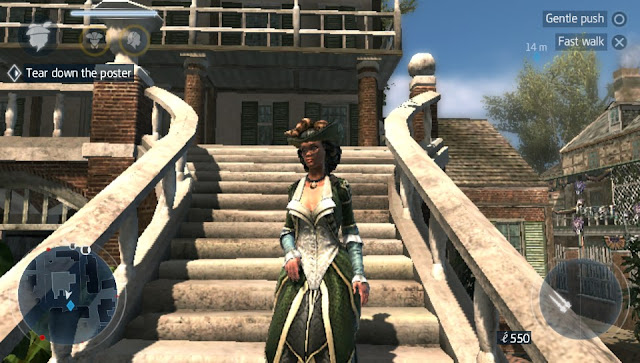 The streets of New Orleans, it quickly transpires, are no place for a lady, and most missions are a lot easier when viewed from the rooftops in Assassin's garb. However, some need to be undertaken with her bustle out, so its slow and cautious progress (as ladies don't climb), trying to avoid combat, or getting others to help her you.

Fortunately, Aveline isn't decked out very often, and in full assassin's flow, leaping from beam to roof to tree, the game feels just as slick and smooth as it did in the other games. 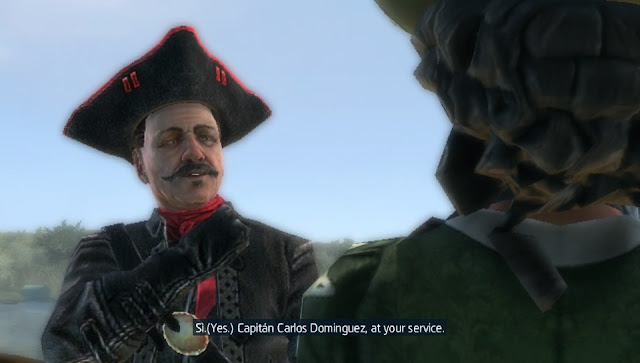 Stop and look around, and the graphics are very fetching, apart from some leapy shadows. The towns are well populated, with busy docks, timber-framed buildings (with lots of nice handholds) and you can usually see one or two towers in the hazy (slightly vaselined) distance for a better vantage point. In any of her outfits, Aveline is an attractive sight, with her piratical assassin's clothes, slimming slave wear and her posh frocks (which can be customized to create new looks).

The tools of her trade can also be improved and upgraded across the game, from new poisons that have peculiar or fatal effects on their victims, to dual wielding, Aveline can pack a mean punch and fighting will rarely cause you to fail a mission. The most likely reason for that is failing to fulfil some set goal, which is a pain, but usually easy enough to figure out and only a couple of minutes of lost gameplay. 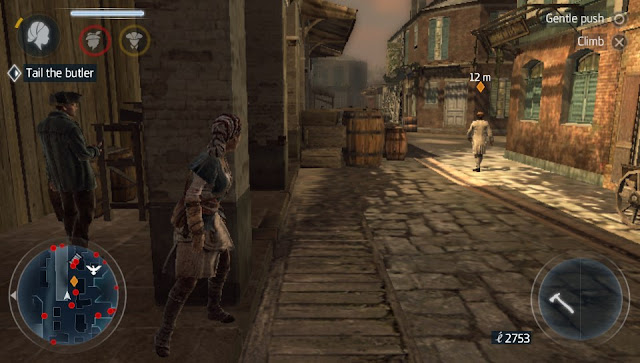 From town to farms to the swampy bayou and further afield, Aveline seems at home, with a network of high-rise paths and opportunities for her to explore and find hidden objects. From random kills of alligators to stealthy parts of missions and lots of little box-ticking side quests, there's always something on the go, but the story never quite manages the dramatic pull or push of, say, Halo 4 which I'm playing in between bouts of Liberation.

However, you try playing Halo 4 on the train! Aveline's missions are pretty well sized for on-the-go gaming with most targets within a few minutes reach. Reasonably loading (and reloading) times mean you're never twiddling your thumbs and the useful tips in the corner mean you won't be scratching your head when you come back to the game. 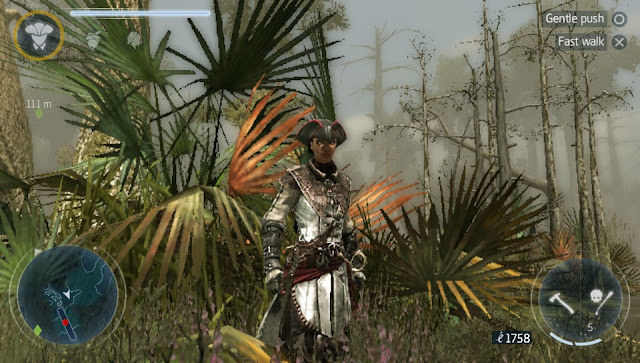 The real niggles with Liberation come with the fact you can often ignore the armies of defending soldiers, wade up to a target, perform the assassination and the mission ends right there. some soldiers you do kill (in high places) often hang off floating in mid-air making for ugly scenes and men will happily stand around while you blowpipe their comrades from distance, basically Liberation isn't very smart.

These glitches could ruin the flow of the game which is probably the reason for so many 6s and 7s in reviews. But there was a day one patch for Liberation with some fixes and I'd expect a couple more to come as the rush to release the game beat the coder's for time. 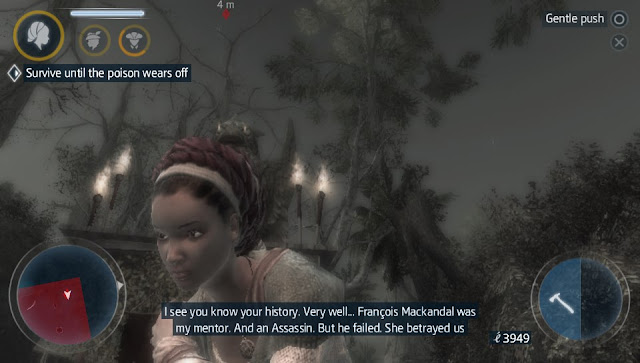 None of these negatives are what you'd call game breakers and the touch controls are largely helpful, with weapons selection, opening envelopes, swiping down your wanted posters and so on, no complaints about those. But the overriding feel is that game isn't quite there in terms of ambition:
Just a little more here or there could have been woven in between the main plot to liven events up.
That's where the game feels a little weak for me, but I've no complaints about the value, the expanse of game, the lite-combat action, the occasional joy of an assassination well done and the splendour of the Mexican pyramid or caves. The second half of the game sees the pace pick up, but its not quite enough to balance the two halves out. Still, a cracking adventure with great ambition for a portable title that