Madden 13 to get a big PS Vita update

on October 10, 2012
What should we call it now? Madden 13.1? Anyway here's the details of the update, fixing crashes, bringing smoother gameplay and other improvements, shipping in a week or so. I guess that FIFA 13 will probably get some similar treatment, trying to make these dodgy releases a little more palatable for gamers. Also, do we have en EU release date for Madden 13 yet? Where the hell is it! 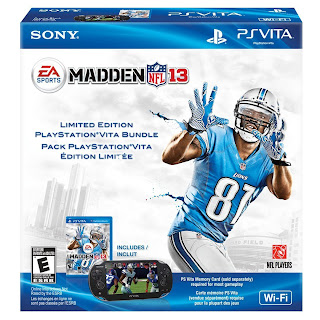 Noticeable hitches during cut scenes in between plays, which caused a drop in framerate, have been improved.
Call Your Shots on Defense can now be called during the Offense’s walk to the line instead of having to wait for the Offense to be set.
Gameplay camera adjustments. Cameras should now be closer to the field.
Call Your Shots camera can be accessed during the pre-play walk to the line and will indicate when it is able to be used after the players get set.
Out of memory crash has been fixed when loading in and out of games.
Fixed Left Stick issue during playcall when trying to scroll.
When the user exits from a playbook to a package and starts scrolling, the selection will now move to the top.
Coin toss cameras have been reworked.

Overall online stability improvement.
Various issues that may cause a user to disconnect from another user have been addressed.
Unranked games will now influence player skill points.

Team Records have been updated for the previous NFL season in Franchise Mode.