on July 17, 2012
Firstly, an apology. As with every PlayStation launch, there are some games you have to buy, Ridge and WipEout. When the Vita came out I was perversely and deeply curious as to how Sony and Namco had managed to balls up Ridge Racer, so I brought that one first. If only I'd stuck with Sony's rocket-ship racer, my life would have been a bit happier. So, sorry WipEout, I won't abandon you again.

I finally picked WipEout up now the price has dropped in places (but not PSN, best price is currently £19.99 at Simply) and there's the Fury expansion to grab too. From the first second, it transfixes you. Sure the rendered intro is gorgeous and tells a loving tale of the automotive quest for speed, the branching event menu is slick and progressive, but the first time you zoom off over the start line, WipEout is so beautiful, insistent and demanding of your concentration, the ultimate twitch racer.

We all know the drill with this game, but the hours still fly by as you shave seconds off your speed laps and time trials, edge further into the zone and battle your way through the combat events and races. The main roads feel a little wider, opening up the accessibility just a touch, but 2048 adds narrow branches to challenge seasoned racers and give them more rewards/advantage in a tight race. The evolution (or devolution, since this is set before the other titles in the series) of the ships is stark, with racers, fighters, agility and experimental models (found through secret missions) all there to be earned and wrung out on track. 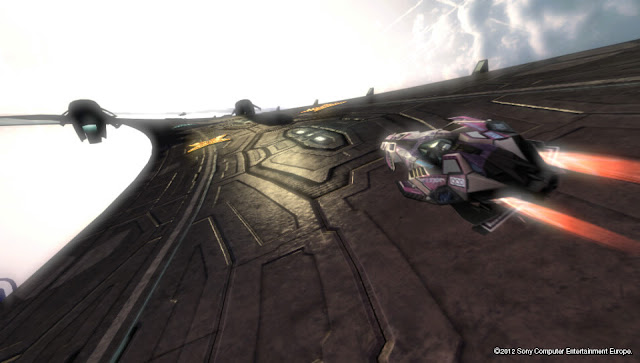 That's not to say things are quite perfect. The small screen means you can easily miss bombs through the smoke and haze, and a big red-light overlay would be good to augment the starting display that you squint at in the distance. While not the game's fault, the Vita's speakers are useless at lower levels, producing a barnyard of sounds that only a decent set of TurtleBeach (in my case) headphones can resolve into the thumping soundtrack, engine whines and warning tones needed to really get into the zone.

With a perfectly crafted mix of challenges and rewards, (especially as the Vita has trophies; the equally slick PSP Pure and Pulse titles felt so bereft with you left to admire your own progress) and massive multiplayer campaign, plus the new Fury pack, WipEout has about fifty trillion times the life of Ridge Racer that its developers so brutally emasculated.

Hopefully, you already own this title. If you don't, or are new to the Vita, get it now and set aside a good chunk of your life to enjoy the sights and sounds, as they whiz past at a zillion miles an hour, thankfully there's replays and photo mode to watch it all again.