on July 19, 2012
I like Persona 3 Portable for many different reasons. Firstly, there's very little mind-numbing exposition and introduction. You're pretty much straight into the game, controlling your character (him or her in the PSP udpate) through the introductory stages.

Secondly, the game opens up with near perfect pacing. New areas and skills become available quickly enough to keep you hooked. Also, nothing gets boring, the travel back and forth between places can be speeded up by maps and shortcuts, conversations can be jogged through. That'd be fine in any game, but with a story as dark and intense as Persona's things rattle right along.

But what is Persona? You might be asking. Well, its a role playing adventure game where your character (and party of friends) blow their brains out on a nightly basis to summon powerful spirits (the Personas of the title) to fight off demonic foes that appear at the midnight hour (a sort of extra happy hour for malcontent demons to try to take over our world). That'd be a lot to take on, especially for the bunch of students who make up most of the team. 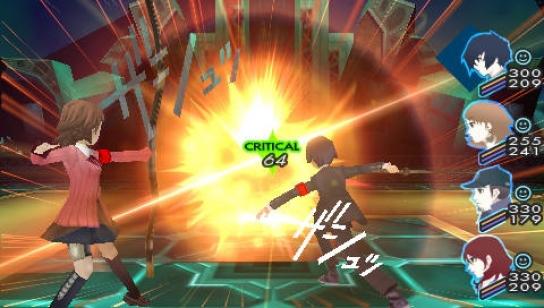 They have to attend school during the day and bust demons by night. Which leaves them tired and grouchy at times, but an essential part of the game is forming relationships with new people to help craft your personas for the night's battles ahead. Combat is turn-based, and you don't need a persona for each battle, weaker characters can be seen off with a sword, other weapon or elemental spell.

The higher up the 250-storey tower of Tartarus you go (that's what your dorm turns into during the lost hour) the bigger, meaner and nastier the fights become, so you'll need stronger personas. Each one has strengths and weaknesses, so is useful in some situations. As a major bonus, your character is the only one who can choose from multiple personas.

As well as levelling them up in combat, you can go to a special "Velvet" room and combine two personas into one new one, influenced by your social status and standing at school. All of these elements flow neatly together through night and day, creating two distinct atmospheres, each with their own challenge and aims. 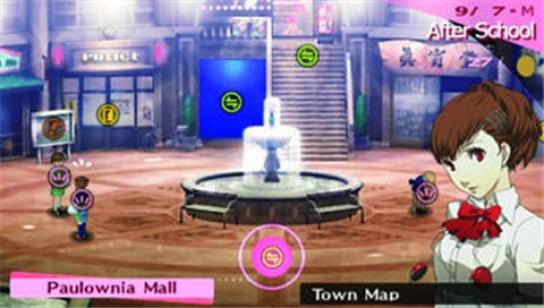 Nothing within the games mechanics is overly complicated, combat is fast and fun, with helpful but non-intrusive advice from your advisers like the lovely Mitsuru. While portals zip you up and down the levels of the massive tower to keep you pushing ahead. Crafting personas is a brief but thoughtful process and the school's social scene is a fun minefield to navigate.

Soundtracked by beautiful music, and with slick graphics throughout, the only real aesthetic let down is the randomly generated Tartarus levels which look a little primitive. Otherwise this game is everything I'd hoped for from all the hype and make me look forward to Persona 4 Golden immensely, but I'd be quite happy to grab Persona 1 and 2 from the PSN while we wait. As an example of great game design, this really impresses, by letting the player get on with it is leaps ahead of games that have a lot less plot but spend ages dragging you through it and the interweaving of school and nightly terrors is a brilliant leap by the creators.

I'm sure the game gets better, deeper and more nuanced as you get further in, but I'm happy to write this now, with a wholehearted recommendation, based on the excellent introductory experience and early going so far.