on May 15, 2012
Big monsters, bigger spells and huge weapons seem to be the order of the day in a new batch of Soul Sacrifice screen shots, posted on the ATB site. With traditional demons, wide-mouthed, many-toothed slugs and some very angry trees to fight, at least players won't complain about lack of variety. 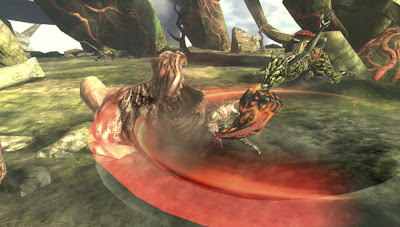 Just hope the combat is up to scratch with the various weapons being flexible enough to cater for gamers brought up on Diablo's crafting system (or some other method) to encourage western gamers to join in, rather than just ripping off Monster Hunter's system.
diablo keiji inafune monster hunter ps sony sony vita soul sacrifice vita weapons