Humour can go a long way to make or break a game. The previous JRPG I played similar to this was Aedis Eclipse on the PSP and, lacking any of Disgaea's crazed brand of humour, it really turned into a grind. But I'll be delighted to carry on playing this to the, presumably, bonkers conclusion, as with every cut scene and twist in that tale makes you think something along of the lines of; "Huh?", "Did he really say that?", "Chortle!", "Nooooo!" and "Ewwww!" Sometimes, several at once. 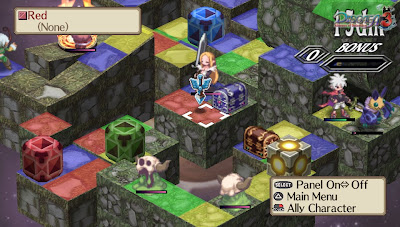 It is a game that breaks with a whole bunch of RPG traditions, you don't start in a dungeon or forest, in fact most of it is set within the steepled towers of the Evil Academy, school for badass demons in the Netherworld. The teachers and pupils (average age, 1,500 years old) here are so deluded and spend so much time infighting, they have little need to go outside for their adventures. 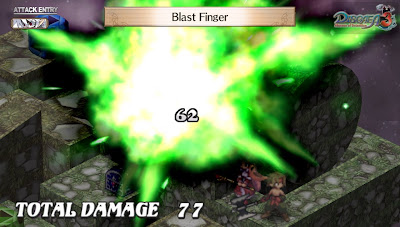 Mao is the anti-hero of the game, mad because his dad smashed his PlayStation saves. His dad happens to be the Overlord of the Netherworld, so isn't a demon to be taken lightly. It will take lots of training, teamwork and suffering through the quirky/bastardly realm of the Netherworld to get his own back, with some wild and devious twists in the plot. 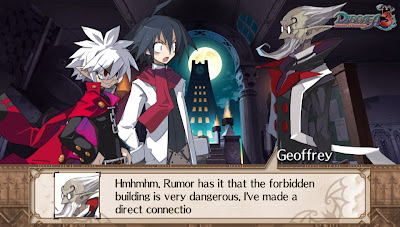 The first few hours feel like an extended tutorial as you learn the ropes of the buddy system, bonus blocks and the basics of combat, magic and the classes – don't disrespect the Gods of Cookery! There is a lot to take in and below the cheesy, bubble-gum veneer is a pretty deep game with plenty of variety to experiment with, and you can jump back and forth between battles and classes to learn new tricks and master the various arts.

Naturally, being an evil school, combat isn't the only option, there's bribery, theft, politics via homeroom voting and status ailments like "deprave," plus the ability to create new classmates to bolster your gang of friends. You can spend almost as much time building and tweaking your party as you can in battle, and there are also extra levels in the Item World and other places to go on experience raising and loot stealing runs. 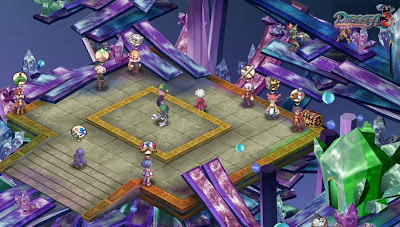 You also end up with the people you were fighting in earlier battles on your team, adding new skills. So, it is useful to pay attention to what they were hitting you with to see how you can use them in action. With death not being an option in Disgaea, only defeat, you can keep trying new ways to win until you succeed.

There are some nags, the Vita's rear touchscreen can trigger all kinds of odd view changes, moves through menus with an errant casual touch. The combat system feels rather antiquated and restrictive, and it is easy to forget about some useful tactic due to the lengthy Scooby Doo-ish cut-scene chat. Still, loads of fun and hugely inventive, this is a game apart from most role-players you'll come across.

I've got ages to go in this adventure yet, but can thoroughly recommend it, purely on the basis of having enemy characters called Cantankerous and Cruton, never mind the fun in character, special move and team building.