on May 14, 2012
On the latest edition of Bonus Round, the industry's leading (read, only) analyst of note shot his mouth off about yet another subject he should only be talking about to investors who pay for his company's (Wedbush) reports. The man is, of course, Pachter, and he mentioned, "There is one big title on the Vita that hasn’t been announced yet that I was pretty excited about." in part two of the webcast (past the 16:00 mark). 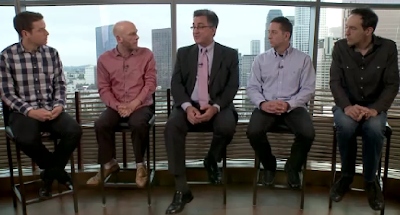 Pachter (center): "I know something you don't, na,na,na,na, naaa, naaa"

Drool on in your own mind about what that could be (comments welcome), then panic a bit that this industry titan thinks there's only one awesome game in Sony's arsenal. Thanks to PSLifeStyle for the news. The rest of the report is supposedly bright people spouting the same thoughts that the rest of mere mortals already know, instead of suggesting anything useful.