Ridge Racer is getting better... should have been a free pack-in title

on April 05, 2012
Having put some more hours into the game, and thanks to the free Gold Pass and its additional content, it looks like Ridge Racer might finally be turning into a proper game. Sure all the music downloads are just ear candy (must figure out how much of my memory card they're taking up). But, now we've got a couple of extra cars and a new track (with more to come) it feels like a slightly more complete experience. 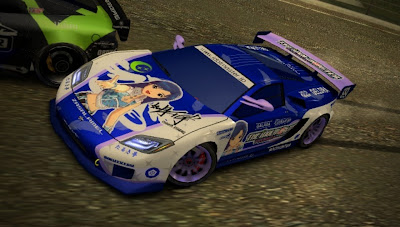 The only thing I'd have done differently is have made it a pack-in title with the console, just like on the original PlayStation. Imagine all the petrolheads that would be whizzing around the online mode now instead of the slumbering hamlet it currently is. It still takes me a few goes to find a suitable lobby, with the hard core gamers all way out in classes miles ahead of my own.

If it had been a freebie, then Sony could have charged for every music track, car, course and produced a huge amount of Sony-character and third-party flavoured car decal skins (like the Idolmaster one above that the Japanese are enjoying).

I'd imagine that approach would have generated a lot more money via DLC than Sony has made with the game's dismal chart showing. But that would have taken a brave and courageous move, which Sony doesn't seem to know much about these days.
dlc gold pass namco ps vita ridge racer sony