on April 02, 2012
The much teased Hunter x Hunter game site is now live showing off a full title,  WonderAdventure and some of the characters from this popular manga. The only details are a 2012 release date and its a PSP-only title from Namco. The series is all about a boy whose, presumed dead, father is really a hunter of fantastic creatures, master criminals and other rarities. 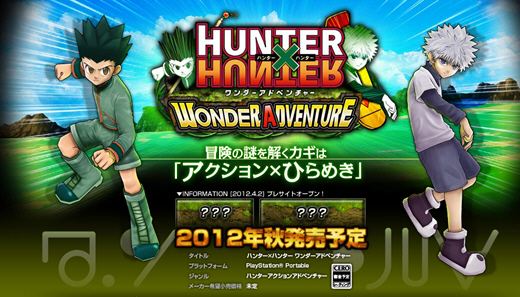 There have been a bunch of portable and PlayStation games based on the manga or anime over the years, but it looks like last year's refresh of the series has sparked enough interest for a PSP title. As the kid goes after his father, he meets other hunters, providing much of the game's challenge.
anime Bandai hunter x hunter manga namco psp sony psp wonderadventure