on March 01, 2012
UPDATE: As well as the news from Japan an overheard conversation in London suggests that Sony will be making some big news at Games Developers Conference next week. Hopefully a couple of new titles will be announced to stir the pot... the ThatGameCompany hit Journey sounds like an ideal Vita game, or even its predecessor Flower.

Original story.
PS Vita sales getting you down, software developers (allegedly) fleeing the system? Why not hold a big fat webcast to show off a bunch of new games that will bring the punters running. That's what Sony Japan (news c/o Andriasang) is up to with a 9th March webcast called PS Vita Game Heaven (or paradise depending on the translation) in which viewers can not only win PS Vitas but also find out about the first big post-launch batch of titles, new services and more. 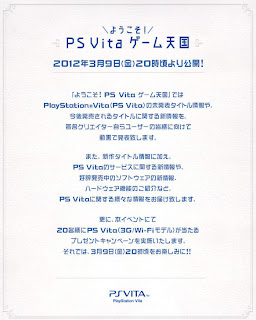 Will it be Monster Hunter? Probably not (Capcom will likely announce that at Captivate in early April). How about a Final Fantasy title? Maybe. Gran Turismo Portable 2? Don't get me started! Who knows? One good point is that the event is live on this site at 8PM Japan time which makes it a palatable 11AM in the UK.