on March 22, 2012
A month after getting my hands on my Vita and this game, I've finally had the time to finish the job, and its been quite the thrill ride. In fact, if I had the space and time, I'd probably rush out to get a cheap PS3 and the previous games in the series, so endearing is this installment.

But, this is my first introduction to the world of Nathan Drake, a character who is a clear spiritual successor to Lara Croft and who spends more time than is healthy hanging off ledges and swinging on ropes than is good for anyone. With a fair bit more gun play than Tomb Raider, most of the adventure is split into two types of level, shooting and clambering, with a few places where the two collide to kinetic effect.

The game's bedrock features, picking up new weapons, letting them off and leaping from ledge to rockface, to pillar and so on becomes first nature very quickly. Once you get into the meat of the game, some Vita-specific features come into their own. Climbing up and down the ropes by tickling the rear touch pad is one of the more natural moves, and the QT fights in slo-mo let you appreciate the detail in the graphics. 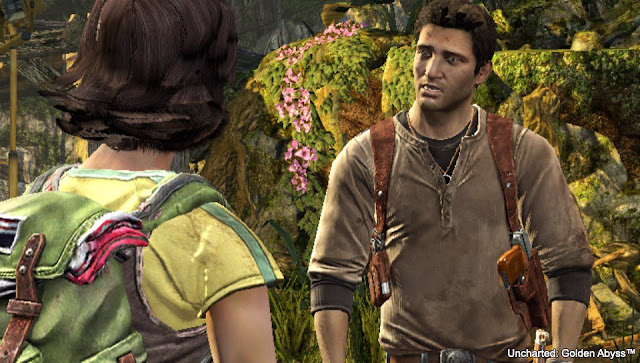 Aside from doggedly following the plot, laden with double-crosses, rescues and much peril, most of the fun comes from peeking into every nook and cranny for all the hidden loot, usually signified by a tiny glint. That job becomes a lot easier with the Black Market treasure map you can pick up in the Store, which shows you where they all are. But, on your first run, try to find as many as you can, following your own instincts.

I'm not sure about the fun or benefit of some features like taking scenic photos using the touch contrls as one of the sub-missions, but again, anything that has you take time to look at the intricate level of detail in the world on a portable is a good thing.

Uncharted isn't really a game to play just to win all the achievement trophies on offer, but there are certainly plenty to be had, if you fancy fist-fighting your way through the game, or being a head shot king. It's a shame there aren't a few more skill-related ones like doing certain levels in a particular time or finding some cleverly hidden almost inaccessible areas, but the main game is way too enjoyable to be worrying about that.

I was rather concerned at some of the lower scores from proper reviewers when I decided to buy this with my Vita, but as a demonstration of the handheld's power it is way ahead of everything else I've played and there's a very good reason it is listed as PCSF00001 on the side of the box. Uncharted does prove the Vita can do the big console games, and very well. (As a demonstration of that power to other developers, it will take some time to see if they agree and bring their key titles across to the Vita, something in a battle of limited resources and budgets, I'm not sure it will win on.)

But as a game for mere mortals like me to play, this is a hard driven, fiercely plotted story that's well paced, acted and brought to the small screen. Bravo to the developers for doing such a good job on a pivotal launch title, I look forward to running through a few more times to pick up all the bits I missed.