on March 05, 2012
I've seen quite a few linkings of the PS Vita to the PS3 title Dust 514 since the logo appeared at the first PS Vita unveiling. However, the site has always maintained a PS3 only stance, but there will be a crossover, kind of.

Eurogamer brings news from the developers, saying that at first the Vita will get a companion app to help players navigate the sprawling free-to-play game's universe, in-app purchases and other systems. Over time that might evolve into a full game...

"The publisher also revealed a Vita version of the game is planned, but said it will begin as more of a “companion app” to the PS3 game before evolving with its own gameplay systems.
“At the most basic level, you can do transactions on the market; equip and customise your character, your vehicles; set up strategies with your friends and Corporation members – all of these sort of companion functions on the go,” Laurino explained.
“We’re also exploring all of the super fun exciting stuff – interesting gameplay opportunities and things like that. As we continue to explore what the possibilities are, between Vita and PS3, of which there are many, we’ll keep updating the app with stuff like that over time.” 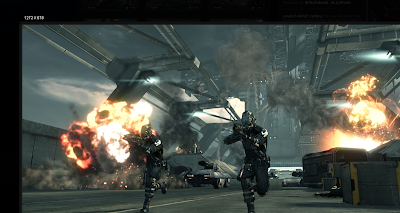 Who wouldn't want this on their Vita?

Having a turret cam mode on the Vita for those big tanks and ships would be great for same-room multiplayer and there are loads of other possibilities. Here's hoping more free-to-play games head our way, as the category is proving highly
app companion dust 514 in-game ps vita ps3