on February 23, 2012
After I noticed that Rayman had almost sold out at Amazon (UK), a quick look at Metacritic shows that the cartoon platformer is also top of the score averages. Ubisoft is doing pretty well in that respect, with Lumines also rating highly. 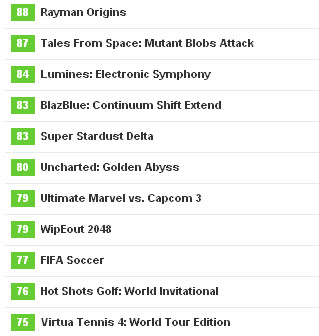 As for the, rest, its almost a very PSP situation, with lots of highly-rated games but nothing standing out, although since we're in the first week, no one can hold that against it. Also, the first batch of reviews of games for a portable always seem to have the same type of comments "its good... but not as good as a real console" or "this updated version of old game here isn't quite right" which I think skews the results down a bit.

Let us know what your favourites are so far. I'm getting my Vita tomorrow and will probably settle for MotorStorm RC and Everybodys (Hot Shots) Golf for now as I really want to test out the multiplayer side of the console.
lumines metacritic ps vita rayman scores uncharted