on December 16, 2011
In a few hours, lucky Japanese gamers will be picking up the PS Vita. Expect some frenetic scenes as gamers move into the next generation of portable fun. Andriasang has a massive gallery of the accessories that will be available.

Japanese stores are preparing for the big day with events and expect lots of photos of happy campers queueing for hours, then gurning for the camera when they get their little blue box. I'll update this page with news and pics as they happen.

It'll be fun to see what games the early movers pick up for their Vita and just what their reaction is to the price of memory.

Here we have what looks like the first real-world user unboxing of a PS Vita.

Enjoy a browse through the PS Vita's manual on the official site, in English. You can now take screenshots as you play (PS button and Start at the same time)

Play Asia do a bit of PS Vita unboxing, the dirty teasers: 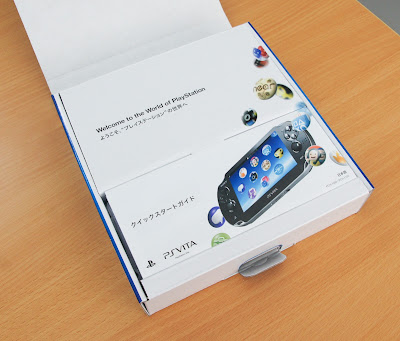 Famitsu has site up its own Vita site to keep track of events, (easily translatable with Google Chrome).

Word is the first shipment of PS Vitas is some 700,000 which doesn't sound much for a company that's been aiming for a single territory launch. Apple must be laughing their faces off, that's barely enough for metropolitan Tokyo's gamers let alone the rest of the country.