on September 16, 2011
Wow, love the clarity of the PS Vita screen and games in motion, rather than the previous direct feed videos I've been posting (clips at the bottom)

Within minutes of the TGS show opening to the public, the lines to go and play the PS Vita were so long that Sony had to ask people to stop queuing, so people could get to the other attractions. Clearly the lack of a Monster Hunter title (so far) isn't stopping the Japanese PSP horde from getting ready to move on. 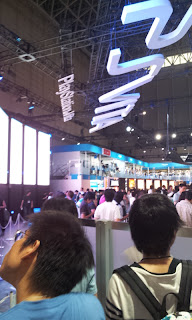 The no-doubt well-ordered chaos was demonstrated by some tweets:


Sony's Vita hands-on plan was a tragic clusterfuck of a miserable failure. I did get to play Army Corps From Hell at Square Enix's suite tho - Wired's Chris Kohler


With 80 demo machines for people to play with, it shouldn't be too long before the queue starts building again, but its going to be a long time before keen fans get to have a go on the new system. With all the major game announcements done, it looks like Vita will be the star of the show be some distance.

And, those that did get in got to play some of the cracking titles on show, note try them in 720 if possible, fullscreen - awesome: