on July 19, 2011
In an interview on Destructoid, an Ignition rep reckons that the PS3/360 game will see spin off titles launching on the Sony Vita or Wii U, possibly with a female protagonist to get the most out of the brand. The game is out towards the middle of August, hope for some good sales numbers if its to appear elsewhere. 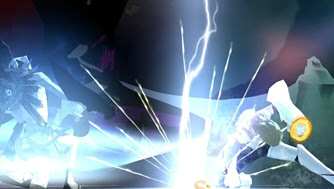 Its cartoony 2D/3D gameplay and mix of platform and combat action really makes it stand out. It scored 34/40 in Japan's Famitsu and with its unique look should win over fans if the gameplay carries over and resonates with western gamers.
el shaddai ignition sony vita