on May 24, 2011
Manga tale Steins Gate [wikipedia] is unlikely to get a western release but is worth a mention anyway. Where else will you find people using their microwave to send messages back in time? The visual novel was an XBox release in 2009 but hits the PSP in June (hey, what's a couple of years between friends?). 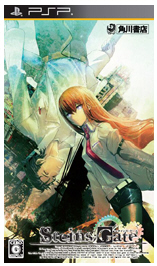 Sure, its not a proper game, but if you've any interest in Japanese media, its worth a go - its not like you can't play the game. Published by 5pb and Nitroplus it has a decent heritage and a sequel to Steins Gate in proper game form is due out too, but we're not sure on what format.
manga psp visual novel Shutainzu Gate steins gate visual novel