Sony Throwing Random Bundles Out There

on May 25, 2011
Sony has unveiled a new PSP bundle, but we're not sure why. The so-called "Dads and Grads" limited edition seems to be the result of Sony scraping around the bottom of its bargain bin, throwing some bits together and chucking it on the stall. 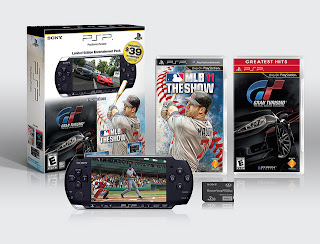 Buyers will get Gran Turismo, MLB 11, a 2GB MemoryStick and a black PSP 3000, all for $159 (£99) which isn't a bad deal, if you ignore the stupid title (which thankfully doesn't seem to appear on the box). Some better creative thinking on the marketing side might see Sony sell a few more PSPs in the run up to NGP, we await the "Moms and Femdoms" edition with a sense of dread and curiosity!
gran turismo mlb11 sony ngp sony psp bundle