on May 01, 2011
Okay, I know nothing about this game, which is a good thing. Having been fed the hype of all the recent Square and other major releases, its good to come into something cold. Aedis Eclipse is a strategy RPG, set in a land where robots do most of the fighting and the school kids are getting way out of hand.

You start in a strange land, that has seen the survivors of a great battle split into factions, making up three campaigns. You start with a choice of two scenarios, Nature's Green Wonder and Bottom of the Earth. The later comes with a tutorial which you'd be well advised to take, but - funnily enough - fails to teach you all that much. In fact, learning about Aedis Eclipse is easily enough to make you give up, but if you persevere, there is a decent game begging to get out. 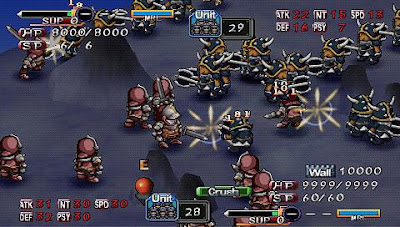 When you finally get to the other side of some scene setters and grating pre-school banter, you find that your heroes go by names like Quinn, Keri, Mary and Hank – hardly heroic stuff. Then its off to battle, as the disobedient school kids peg it towards the action in the hope of a better look at some new threatening robot monster. Within seconds of taking control, you hear the game's first major annoyance, any time you press the wrong button or try to perform the wrong action you get a horrific buzzer sound – did the sound man work on game shows in his spare time?

Get beyond that and you open up on the first mission. Your crew push out into the battlefield, looking for enemies to smash and rewards to claim. Combat is semi-automated, so getting the right unit into the battle is essential. While fighting you can change the strategy or launch the Captain's special powers.
Once the early battles are out of the way, you will have learnt how that each tile on the board can be turned to a different element to boost your advantages or weaken an enemy. In later maps, all kinds of different powers appear and you can build skill- or health-boosting buildings to improve your chances.

You can also capture prisoners and turn them to your cause, but only back at base which seems a rather random stipulation. A good point in the game's favour is that your victory and defeat conditions are regularly displayed, I hate portable games where you come back to them after a while and haven’t got a clue what you were supposed to be doing. That won't happen here. 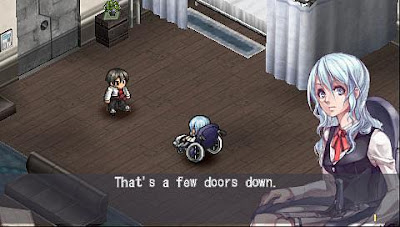 The various missions and stories across the campaigns help drive your teams across the grid-based landscape. There are a few choices of route, which gives you some feeling of control, but the battles start feeling overly similar rather quickly.

With the three realms linked by a huge spire, there is potential for awesomeness, but the twee story and overly-complex menus try quite hard to derail the game. Ignore all the trappings and there's a reasonably strategy RPG to grind through with some fun battles, but it is miles behind the likes of Final Fantasy Tactics or even Dissidia, which has some of the same tricks, but presented so much more fluently.