on April 26, 2011
In Tokyo, Sony has just unveiled its S1 and S2 tablets, one being a home device, the other a more portable-friendly clamshell format. The Android 3.0 Honeycomb devices pack a 9.4 inch screen and a pair of 5.5 inch screens respectively, no real specs were mentioned beyond Tegra 2 chips.

The S2 model also looks better for gaming as the player can have virtual keys on the lower screen with the game up top. The models will be released as Sony Vaio devices, nothing to do with Sony Ericsson or the Xperia Play. As such they should work with Sony's home entertainment Bravia devices in fun and interesting ways. 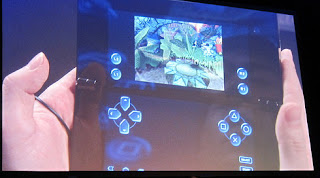 There is coverage of the launch from the WSJ, and most sites now have pretty pictures. As the devices are PlayStation Certified, they will be able to play games from the PSN store, whenever that comes back up - which wasn't mentioned during the event. Otherwise, it does the whole movies and music thing with Internet and social stuff. 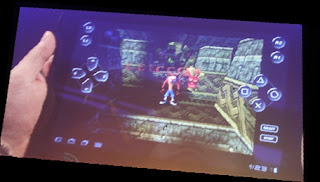 The S1 with BIG buttons
The tablets are expected to launch in the Autumn which is about a million years too late to have any impact as a market mover, will this news stop anyone buying an iPad 2? Um, no!
android 3.0 eu psn store honeycomb playstation certified sony s1 sony s2 vaio