on April 01, 2011
Sony will be launching Qriocity soon for PSP, Xperia Play and (when it launches) the NGP. The streaming music service will bring a much needed boost to the PSP which hasn't had any meaningful new services for several years.

While we can enjoy comics, moves and games via PSN, music has been sorely lacking and, with the best will in the world, monkeying around with Media Go to get music over is a bit of a chore. The streaming service will get around the need for extra storage.

There will be two options, a £3.99 genre-specific one and the £9.99 premium version. Now given I already get my specific tunes from iTunes or Amazon, which has just launched its own cloud player (below) and play music from Spotify on my PC for free and Last.fm on my Xbox for free, do I really need another service? 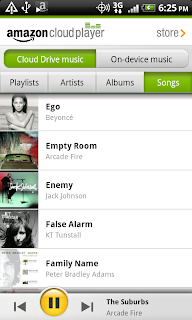 As much as I love my PSP, I think using my phone for listening to music is generally easier. Still I'll give it a whirl when it starts up (hopefully Sony will run a 30-day trial) and we'll see how much impact it has on my musical day.
music service qriocity sony ngp sony psp streaming music xperia play