on April 08, 2011
Ah, Square intro videos, I hope that – when I die – the flashbacks of my life are rendered as smartly as this, with lots of particles, flare effects and lingering glances from loved ones.

Someone who knows all about near-death experiences is Aya Brae (heroine of the Parasite Eve series [the first of which is available on the U.S. PSN, hopefully coming to Europe soon] to which this is mildly related). Her Christmas Eve is interrupted by the devastating arrival of massive plant-like tentacles and associated roaming ghouls from underneath the streets of New York. When these guys come to town, they really trash the place. 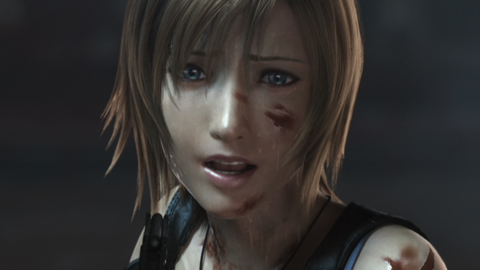 A year on from these horrific events, from the relative safety of her organisation's secret bunker, she is beamed into that horrific past to deal with the infestation, a time when the alien menace means near-death happens on a minute-by-minute basis.

The time travel is invoked by a fancy system called Overdive (not a typo), where Aya takes over the body of another person, dropping into all kinds of scenes from rock concerts to full-on firefights. Rather than have one life throughout the game, Aya can keep on going as long as she has enough hosts to jump into. 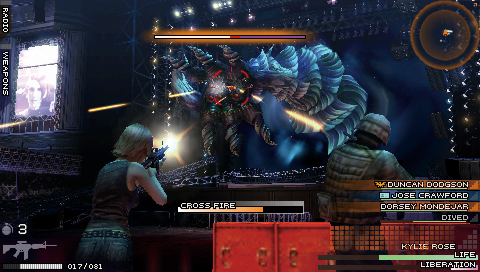 Your nominal comrades can also be used in a buddy scenario called Crossfire, where everyone targets a single enemy, good for high-powered beasts, giving it everything they've got. Combat starts with pistols, M-16s but will soon expand to sniper rifles, heavy machine guns and more.

Aya's other superpowers include a skill called Overkill where Overdive is used to appear inside the body the enemy and blow it bits. Finally Liberation is a power bar that when maximised sees Aya able to automatically dodge attacks, dash in blurred leaps and gives her an energy shot.

From the awesome opening scenes, The 3rd Birthday sets its stall out to impress, but quickly you realise that it largely consists of lots (and lots) of shooting at cookie cutter demons, body hopping and waiting until Aya's superpowers are charged up to inflict the big kill. 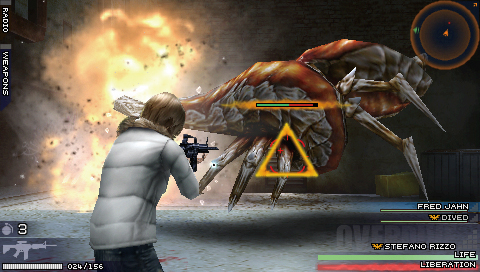 If these creatures are all deformed-DNA riddled beasts, shouldn't they look a little different? There are breaks from the rat-tat-tat of machine gun fire in the form of "run away!" moments and a jaunt in an attack helicopter, but anyone hoping for some thought-based progress will be disappointed.

My main gripe about the game is that most monsters take more than a mag of ammo to take down, so there is a very regular and very annoying pause where Aya gives off a wounded grunt- why a grunt – surely an "Oh-oh" would have been more appropriate, before you can reload. If you can get over this and other minor grizzles, then the game is actually a rather fun romp, as long as you don't think too hard about it.

Through the early levels, you have enough firepower to make it through unscathed. On completion of a level, you get a Metal Gear-like rating depending on your speed through the level , number of deaths and other feats. Accuracy isn't a problem as auto-aim makes up for the PSP's controls and, generally, performing all her powers is done with ease.

A radar shows you where to go and the location of friends and foes. While teleporting can sometimes leave you confused, your objective is generally clear, even so there is endless radio chatter from your dumb-as-mud comrades back at base. If anyone deserves a bullet, they do - try to ignore them! 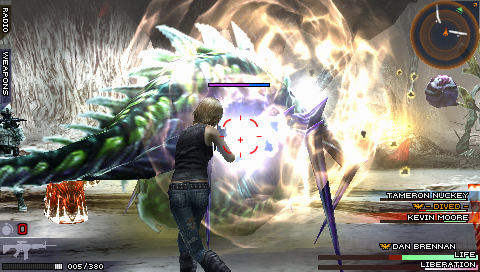 The number of giant beasts that The 3rd Birthday throws at you is very impressive, none of this wading through levels of minions to reach them, they pop up all over the place and while taking them down is often a matter of repetitive shooting actions and some observation, take a moment to enjoy the view of these whirling dervishes, there's some very impressive creativity in their freakish DNA.

Aya's DNA is also subject to change, at the end of a level, or a mid-level rest point, you can upgrade her capabilities as her levels advance with improved healing, more damage and so on. She can also buy new weapons or upgrade her existing ones, which adds a smidge of role-playing diversion to the endless gunplay.

The 3rd Birthday really crams a lot of impressive features and bags of style into a PSP game, but it does end up rather like a high-budget Sy-Fy channel film. It looks gorgeous and plays well, with only the odd camera glitch, but you're better off ignoring the bizarre-to-silly plot and often dumb scene-setting, and enjoying the violence, upgrades and the overall spectacle of it.

Available on UMD, £34.99
The Twisted Edition comes with an art book of Aya in various guises.