on January 05, 2011
So, yesterday we got our first half-decent look at the PSP Phone (Sorry, Xperia Play) but still no gaming shots - I guess if someone activates the phone, Sony Ericsson police swoop in and bust you.
Today, there are some more shots of Final Fantasy IV in action for the original PSP - and very pretty it looks. 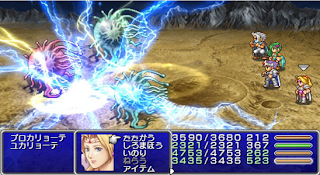 with lots more official pics over on Siliconera. I played the first Final Fantasy on PSP, just so that I had played a part of history really, hopefully this sequel is a little more evolved. Also, does anyone know if the Japanese version has English text, like that original did?
And, Monster Hunter has now shipped four million copies in Japan, making it the fastest selling PSP game in history, according to Capcom. I bet SCEA and SCEE had a game that had done half as well to boost the PSP in the west.
Finally, Gamrfeed has a list of 20 games to look forward to in 2011, some of these are already out in Europe and some are just run of the mill sequels, so don't get too excited.
final fantasy MHP monster hunter portable 3 psp games psp phone xperia